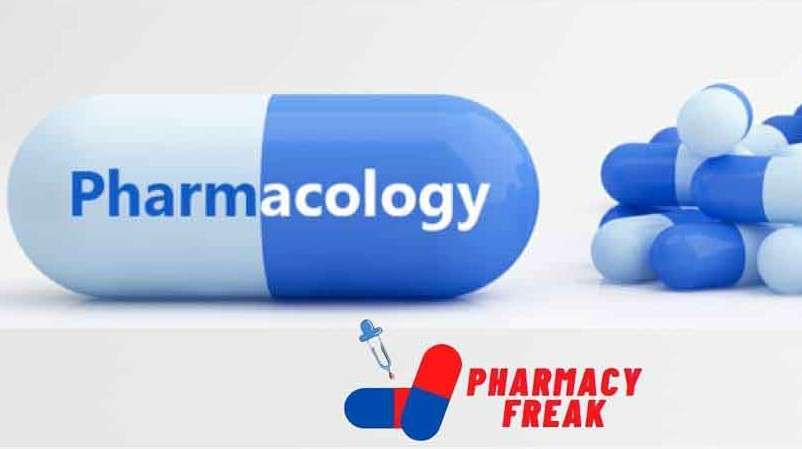 It is the study of substances that interact with living systems through chemical processes, primarily through binding to regulatory molecules and activating or inhibiting normal body processes.

Pharmacology deals with the interaction of exogenously administered chemical molecules with living systems, or any single chemical substance producing a biological response is a ‘drug’.

It is the study of the Influence of drugs on the living system, and the ability of the drug to induce responses such as pharmacological, physiological, biological, and physicochemical.

The primary concern of Pharmacology is not the studying the biological effects that result from the administration of chemical substances but rather the dual aims of:

DRUG: – A drug is any substance intended for the mitigation, treatment, prevention, cure, and diagnosis of any disease or disorder, and maintaining a good quality of health is known as a Drug.
Any substance that is important to impart or give the therapeutic activity for diagnosis, mitigation, prevention, and treatment or cure of disease is called a drug.

PHARMACOKINETICS:- (What the body does to the drug). This refers to the movement of the drug in and alteration of the drug by the body. It deals with the rate of absorption, distribution, binding or localization or storage, biotransformation, and excretion of the drug.

PHARMACODYNAMICS:- (What drug does to the body). This includes physiological and biochemical effects of drugs and their mechanism of action at organ system/subcellular/macromolecular levels.

CLINICAL PHARMACOLOGY:- This branch of pharmacology deals with the study of drugs on human beings.

PHARMACOTHERAPEUTICS:- It is a general term describing drug use in treating disease. It comprises Rational & Empirical Pharmacotherapeutics.

PHARMACOGENETICS:- This area of pharmacology examines the relation of genetic factors with variations in response to drugs. Such variations are known as idiosyncratic reactions, because of in born error in drug metabolism.

POSOLOGY:- It is the study of dosage & dose schedules. The dose for various age groups, like geriatrics & pediatrics or different weight groups, is calculated using posology.

PHARMACOMETRICS:- It is the branch of pharmacology, dealing with the identification (screening) and comparative evaluation (quantitative or qualitative) of drugs.

CHEMOTHERAPY:- It is the treatment of systemic infection/malignancy with specific drugs that have selective toxicity for the infecting organism/ malignant cell with no/minimal effects on the host cells.

PHARMACY:- It is the art and science of compounding and dispensing drugs or preparing suitable dosage forms for the administration of drugs to man or animals. It includes collection, identification, purification, isolation, synthesis, standardization, and quality control of medicinal substances. The large-scale manufacture of drugs is called Pharmaceutics. It is primarily a technological science.

PHARMACOGENOMICS:- Use of genetic information to guide drug therapy.

Eg: Responders and non-responders to LT antagonist therapy in case of asthma.

PHARMACOECONOMICS:- Branch of pharmacology dealing with the cost and benefits of drugs used therapeutically.

Pharmacology is one of the cornerstones of the drug discovery process. The medicinal chemist may create the candidate compound, but the pharmacologist is the one who tests it for physiologic activity. A promising combination is investigated by many other scientists’ toxicologists, microbiologists, and clinicians but only after the pharmacologist has documented a potential therapeutic effect. This article briefly presents the historical development of pharmacology and some of the primary methods used.

Pharmacology studies the effects of drugs and how they exert their effects. There is a distinction between what a drug does and how it acts. Thus, amoxicillin cures strep throat, and cimetidine promotes the healing of duodenal ulcers.

Pharmacology asks “How”? Amoxicillin inhibits the synthesis of cell wall mucopeptide by the bacteria that cause the infection, and cimetidine inhibits gastric acid secretion by its antagonist action on histamine H2 receptors.

The main tasks of pharmacologists in the search for and development of new medicines are:

Synthetic organic chemistry was born in 1828 when Friedrich Wohler synthesized urea from inorganic substances and thus demolished the vital force theory.
The birth date of pharmacology is not as clear-cut. In the early 19thcentury, physiologists performed many pharmacologic studies.

Thus, François Magendie studied the action of nux vomica (a strychnine-containing plant drug) on dogs and showed that the spinal cord was the site of its convulsant action. His work was presented to the Paris Academy in 1809. In 1842, Claude Bernard discovered that the arrow poison curare acts at the neuromuscular junction to interrupt muscle stimulation by nerve impulses.

Thanks to the work of Schmiedeberg, Abel, and others like them, pharmacology proliferated in the 20th and 21st centuries. Many drugs, from lifesaving antibiotics to important hormonal compounds like insulin (to treat diabetes) were developed. Pharmacologists not only studied what effects a drug would have on an animal or a human, but they also studied the drug itself. Meaning, they would study the structure of the compound and relate tiny changes within the compound itself to the effects those changes would have upon the way a drug would act.

Oswald Schmiedeberg (1838-1921) is generally recognized as the founder of modern pharmacology. The son of a Latvian forester, Schmiedeberg obtained his medical doctorate in 1866 with a thesis on the measurement of chloroform in blood. He worked at Dorpat under Buchheim, succeeding him in 1869. In 1872, he became a professor at the University of Strassburg, receiving generous government support in the form of a magnificent institute of pharmacology. He studied the pharmacology of chloroform and chloralhydrate. In 1869, Schmiedeberg showed that muscarine evoked the same effect on the heart as electrical stimulation of the vagus nerve. In 1878, he published a classic text, Outline of Pharmacology, and in 1885, he introduced urethane as a hypnotic.
In his 46 years at Strassburg, Schmiedeberg trained most of the men who became professors at other German universities and in several foreign countries. He was largely responsible for the preeminence of the German pharmaceutical industry up to World War II.
In the United States, the first chair in pharmacology was established at the University of Michigan in 1890 under John Jacob Abel, an American who had trained under Schmiedeberg. In 1893, Abel went to Johns Hopkins University in Baltimore, where he had a long and brilliant career. His major accomplishments include the isolation of epinephrine from adrenal gland extracts (1897-1898), the isolation of histamine from pituitary extract (1919), and the preparation of pure crystalline insulin (1926). His student Reid Hunt discovered acetylcholine in adrenal extracts in 1906.
Today, there is a pharmacology department in every college of medicine or pharmacy.

Pharmacology depends largely on experiments conducted in laboratory animals, but even the human animal may be used as a test subject. Friedrich Serturner, the German pharmacist who isolated the first alkaloid from opium in 1805, administered a whopping dose (100 mg) to himself and three friends. All experienced the symptoms of severe opium poisoning for several days. The alkaloid was named morphine, for Morpheus, the Greek god of sleep,

An interesting example of the use of humans for testing occurred in the 1940s. Although digitalis had been a standard medication for heart disease for more than a century; there were still no reliable methods for evaluating its potency. Biological assays (bioassays) were performed on frogs, pigeons, and cats, but none were satisfactory.

In 1942, a group of cardiologists published “a method for bioassay of digitalis in humans”. The assay was based on quantitative changes in the electrocardiogram (ECG) of patients in the cardiac clinics of two New York City hospitals. It was hard to find patients whose ECGs could be standardized to 97 patients in whom calibration of the ECG was tried, only 18 proved to be satisfactory essay subjects. Fortunately, chemical research on the active glycosides of digitalis, and the development of analytical methods, soon rendered all digitalis bioassays obsolete.

Although humans are no longer used as ad hoc laboratory animals, they are essential in clinical pharmacology. When a new drug compound has gone through sufficient preclinical testing to show potential therapeutic action and reasonable safety on short-term administration and the data have been reviewed by the FDA, the compound is administered to a small number of human volunteers under closely controlled and monitored conditions. This Phase I clinical trials provide information about dosage and the most common side effects to be expected.

The animals most frequently used in pharmacologic studies are mammals. Mice are preferred because of their small size, ease of breeding, and short generation time. Rats, guinea pigs, rabbits, and dogs are also used; each has special characteristics that make it optimal for certain types of tests.

Experimental pharmacology uses animals in various ways. Intact animals are essential for the acute, subacute, and chronic toxicity tests that a new drug substance must undergo, and for important special tests such as teratology and carcinogenicity. Pharmacology per se tends to use excised (isolated) organs or tissues and animals that are surgically prepared in various ways to aid in the detection and study of target activities.

Early in the development of pharmacologic techniques, it was found that an isolated organ or tissue remained functional for several hours in a bath containing a physiologic solution of salts through which oxygen was bubbled. Henrick Magnus (1802-1870) first applied this method to a strip of the small intestine, Jean-François Heymans (1904) worked with the mammalian heart, and Claude Bernard experimented with isolated nerve-muscle preparations.

The organ or tissue is so suspended that the contraction or relaxation of the muscle is mechanically transmitted to a stylet. The stylet writes on a drum covered with smoked paper rotated by clockwork at a constant speed. This device, called a kymograph, graphically records motion or pressure. The effects of drug substances added to the bath can thus be visualized. The kymograph is a relatively crude device. In modern laboratories, organ and tissue movements are transmitted by force transducers to polygraph machines, which produce similar tracings. Or the polygraph is replaced by computerized equipment that issues a digital record.

The surgical preparation of animals is illustrated by the following examples. As early as 1849, the German anatomist Arnold Berthold transplanted testicular tissue into a capon (a castrated rooster) and showed that this induced growth of the comb. This basic method was used in the 20th century to isolate and study male sex hormones.

Similarly, in 1924, Americans Edgar Allen and Edward Doisy used ovariectomized rats to test the action of estrogenic hormones. To study anti-inflammatory agents, rats can be made arthritic by injection of an oily suspension of killed bacteria (Freund’s adjuvant).

Drugs affecting gastric secretion may be studied in animals by forming a Heidenhain pouch-a small sac of the stomach, vagally denervated and closed off from the main cavity, but with an opening through the abdominal wall.

SOME IMPORTANT SCIENTISTS OF PHARMACOLOGY

The scope of pharmacology has expanded greatly over the last decade to incorporate many new approaches such as:

Our society needs pharmacologists who understand the basis of modern therapeutics for careers within, academic, pharmaceutical and governmental laboratories to study and develop tomorrow’s drugs.

The effect of the body on the drug. To produce its characteristic results, a drug must be present in appropriate concentrations at its sites of action. Thus, it is essential to know the interrelationship of the absorption, distribution, binding, biotransformation, and excretion of a drug and its concentration at its locus of action.

Drugs activity over the body The effect of the drug on the body. Pharmaco-dynamics is the study of the relationship between drug concentration and the biological effect (physiological or biochemical). For most drugs, it is necessary to know the site of action and mechanism of action at the le of the organ, functional system, or tissue.
For example, the drug effect may be localized to the brain, the neuromuscular junction, the heart, the kidney, etc. Often the mechanism of action can be described in biochemical or molecular terms.

Most drugs exert effects on several organs or tissues and have unwanted as well as therapeutic effects. There is a dose-response relationship between wanted and unwanted (toxic) effects.

3. CHEMISTRY
The chemical structures of drugs can provide information about the mechanism of action, pharmacokinetics, stability, and metabolic fate.

To read the scope of pharmacology in detail Click Here.