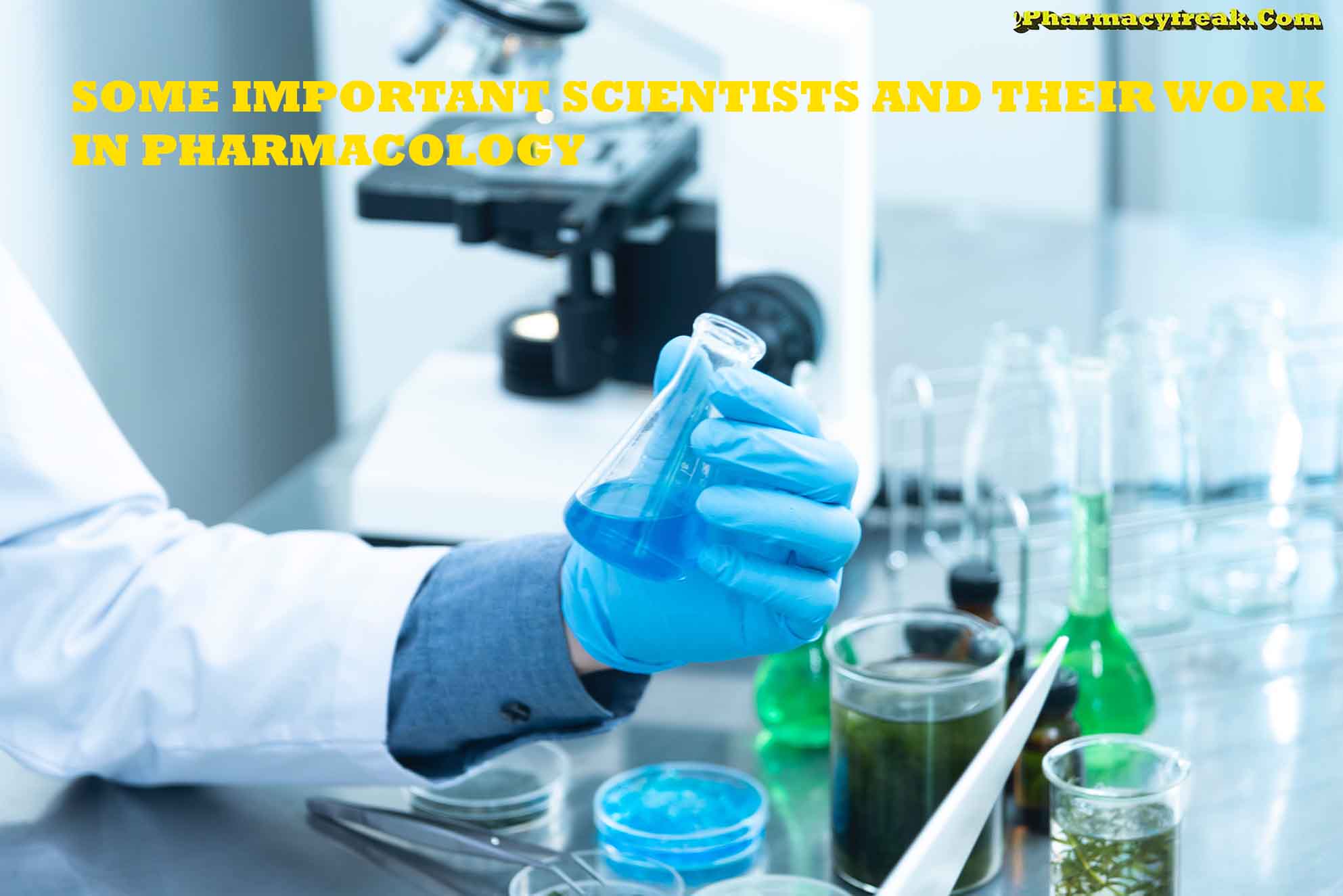 SOME FAMOUS PHARMACOLOGISTS ARE:

The Father of Medicine was the first to attempt to separate the practice of medicine from religion and superstition, and developed his pledge of proper conduct for doctors.

“I will use treatment to help the sick according to my ability and judgment, but never with the view to injury and wrongdoing…Into whatsoever houses I enter, I will enter to help the sick”

Dhanvantari is a Hindu God of medicine and treatment. He is one of the incarnation of lord Vishnu and he is also known as god of Ayurveda.

An early Indian medical practitioner and one of the world’s first surgeons, regarded as the source of Ayurveda.

He perfected many herbal-based cures and natural remedies. He was credited with discovering the antiseptic properties of turmeric and the preservative properties of salt which he incorporated into his cures.

Pioneered the use of chemicals and minerals (zinc) in medicine. Vigorously opposed polypharmacy, or the prescription of multiple ingredients in a single medicine.

A Greek Physician, personally researched each plant and its uses. About 65 AD, he wrote De Materia Medica, “Regarding Medical Matters” on the “preparation, properties, and testing of drugs.”

Five-volume book on the uses of over 1,000 plants and minerals. For nearly 1500 years, De Materia Medica was the supreme authority on medicine and pharmacology in western civilization.

A French Physiologist. In 1842, Claude Bernard discovered that the arrow poison Curare acts at the neuromuscular junction to interrupt the stimulation of muscle by nerve impulses. Claude Bernard also called the Father of “Modern Experimental Medicine”, Bernard’s experiments changed medicine.

Generally recognized as the “Founder of modem pharmacology“.

Schmiedeberg obtained his medical doctorate in 1866 with a thesis on the measurement of chloroform in blood.

In 1872, he became a professor of pharmacology at the University of Strassburg.

In 1878, he published a classic text, Outline of Pharmacology.

In 1885, he introduced urethane as a hypnotic in his 46 years at Strasburg: Schmiedeberg trained most of the men who became professors at other German universities and in several foreign countries. He was largely responsible for the preeminence of the German pharmaceutical industry up to World War II.

In the United States, the first chair in pharmacology was established at the University of Michigan in 1890 under John Jacob Abel, an American who had trained under Schmiedeberg.

An American Pharmacologist, ph.D from the University of Michigan and trained under Schmiedeberg.

In the United States, the first chair in pharmacology was established at the University of Michigan in 1890 under John Jacob Abel.

In 1893, Abel went to Johns Hopkins University in Baltimore, where he had a long and brilliant career.

His student Reid Hunt discovered acetylcholine in adrenal extracts in 1906.

German pharmacist, who isolated the First Alkaloid from opium in 1805, administered a very large dose (100 mg) to himself and three friends.

All experienced the symptoms of severe opium poisoning for several days. The alkaloid is named morphine, for Morpheus, the Greek god of sleep.

A German Pharmacologist brilliantly obtained his doctor’s degree with a thesis about techniques of isolation of frog hearts.

In 1902 in London, in Starling’s laboratory, he met for the first time Henri Hallet Dale, who become a lifelong friend.

Later on in 1909, he was appointed to the Chair of Pharmacology in Graz, and thereafter in 1921, he proved the chemical transmission of nerve impulses & in 1936 He received the Nobel prize, with Henri Dale.

An English Pharmacologist Received his M.D. from Cambridge in 1909.

Worked under John Langle & Paul Ehrlich, also a Fast friend of Otto Loewi. Dale became the Director of the Deptt of Biochemistry and Pharmacology at the National Institute for Medical Research, London in 1914.

Obtained MD degree from Cambridge University in 1908 and 1921: Appointed as the fine professor of pharmacology in the newly established Calcutta School of Tropical Medicine and parallel headed the Department of pharmacology at the Calcutta medical college From 1941 to 1957. He was Director of the Drug Research Lab at Srinaga

Indian Posts & Telegraph department has issued a commemorative stamp in his honor.

German scientist in the fields of hematology, immunology, and chemotherapy.

He is noted for curing syphilis and for his research in autoimmunity. He coined the term chemotherapy and popularized the concept of a magic bullet.

However, von Behring cheated Ehrlich out of both recognition and financial reward. Only von Behring received the first Nobel Prize in Medicine, in 1901.

Scottish biologist and pharmacologist. His best-known discoveries are the Discovery of the enzyme lysozyme in 1923. Antibiotic Penicillin (The wonder drug) from the mold Penicillium notatum in 1928 was a discovery by chance. On 3 September 1928, Fleming returned to his lab. After vacation. Before leaving, he had stacked all his cultures of staphylococci on a bench in a corner of his laboratory. On returning, Fleming noticed that one culture was contaminated with a fungus and that the colonies of staphylococci that had immediately surrounded it had been destroyed, whereas other colonies farther away were normal. He shared the Nobel Prize in Physiology or Medicine in 1945 with Howard Florey and Ernst Chain who purified penicillin.

Known for the discovery of the e insulin-one of the most significant advances in medicine enabling an effective diabetes treatment.

In 1921, Banting traveled to Toronto to visit J.J.R. Macleod at the University of Toronto, where he used his lab for this discovery.

A German pathologist and bacteriologist.

Credited with the discovery of Sulfonamidochrysoidine (KI-730) the first commercially available antibiotic (marketed under the brand name Prontosil).

He found the sulfonamide Prontosil to be effective against streptococcus, and treated his daughter with it, saving her the amputation of an arm. In 1939, Domagk received the Nobel Prize in Physiology or Medicine for this discovery, the first drug effective against bacterial infections.

Lasagna joined the faculty of Johns Hopkins University in 1954, where he established the first-ever clinical Pharmacology department.

A Scottish Pharmacologist. Studied Medicine at Univ. of St. Andrew.

In 1950, he joined the University of Glasgow.

He was interested in the effect of adrenaline on the human heart.

He joined ICI Pharmaceuticals in 1958. In 1964 he joined Smith, Kline, and French for whom he worked for nine years until 1973.

He was awarded the Nobel Prize for Medicine in 1988 for his work.